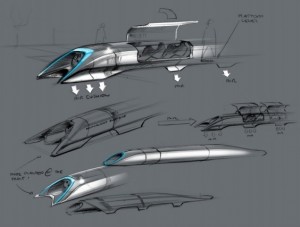 #HyperLoop is the awaited #FifthModeofTransportation

Hyperloop. It’s a bird, it’s a plane, it’s a “fifth mode of transportation” developed by Tesla Motors’ Elon Musk and his #FifthModeofTransportation teams at Tesla Motors and SpaceX.

What is this open-source wonder? Why call it fifthmode? “We have planes, trains, automobiles and boats,” Musk said in 2012. “What if there was a fifth mode?” [ of transportation ].

As Motherboard described it, “Musk’s grand vision for a brand new, supersonic mode of transportation that could zip you from Los Angeles to San Francisco in a half hour. At 380 miles apart, that’s a speed of 1,200 miles per hour—twice as fast as a commercial airplane.”

Sounds like some real Buck Rogers stuff, this #Hyperloop.

What Hyperloop Is: the #FifthModeofTransportation

Per the document, Hyperloop is an “open design concept, similar to Linux. Feedback is desired from the community that can help advance the Hyperloop design and bring it from concept to reality.”

The design team welcomes feedback at:

Unless otherwise noted, verbiage within quotes is from the design document.

At this point, it is easier to describe what it isn’t. It apparently is not a vacuum tunnel, per a Tweet by: “Will publish something on the Hyperloop in about four weeks. Will forgo patents on the idea and just open source it. Not a vac tunnel btw. — Elon Musk (@elonmusk) July 15, 2012”. That was a year ago.
Now, it’s right around the corner: “Will publish Hyperloop alpha design by Aug 12. Critical feedback for improvements would be much appreciated. – Elon Musk ‏@elonmusk 15 Jul”

This “cross between Concorde, a rail gun and an air hockey table” will deliver passengers between US cities faster than the speed of sound.

The #Hyperloop interview with Kevin Rose:

Interview with #PandoDaily – Learn About the #FifthModeofTransportation

Learn More About The #FifthModeofTransportation, #Hyperloop: