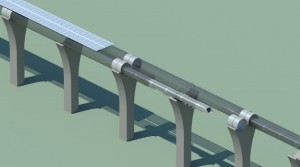 Per the design document, “by placing solar panels on top of the tube, the Hyperloop can generate far in excess of the energy needed to operate.” An excess we can live with.

The 350-mile path provides ample space for collection of energy to power the system. By utilizing 14-foot wide solar panels on top of the travel tubes approximately 26 million square feet of solar cells could be attached to the Hyperloop. That’s almost a square mile of solar power. The Hyperloop system will be able to generate 285 MW of energy under peak conditions, equivalent to 382,000 hp. If the system is built out to support transportation of vehicles, the solar panels could be 22 feet wide. This would allow over 40 million square feet of solar panels to be attached. That’s almost 1.5 square miles of solar collection, which could theoretically produce 446 MW of power.

The Hyperloop system is expected to require 21 MW for operation, which would be much less than the solar arrays would be capable of outputting. Plenty of power left over. In its minimal configuration, approximately 250 MW of excess power would be generated under peak power conditions. This would be enough power to support approximately 250,000 homes.

This would make it one of the world’s largest solar farms, surpassing the current output of the Agua Caliente solar farm near Yuma, AZ.

Illustration from the open-source design document published by Tesla Motors.